Around The World, Get The Look, In The Garden, Out and About

The 5 Roof Gardens We Just Love

Instead of thinking horizontally or laterally, designers are thinking much more vertically when it comes to expanding our urban green spaces. The rooftop garden is now a familiar sight across many of world’s most overcrowded modern metropolises, and they’re not just trendy bars with an outdoor roof terrace either.

Trees, wild flowers and even the odd farm are now being grown above our heads. With demand for rooftop gardens increasing by 60% in the last few years . . . we thought we’d see what all the fuss is about!

Translating as ‘forest spiral’ in English and built in the 1990s, Waldspirale is certainly unique. No two walls, windows or doors are the same and the rooftop gardens look spectacular. Designer, Hundertwasser, sums up this enchanted place just perfectly, by suggesting “If man walks in nature’s midst, then he is nature’s guest and must learn to behave as a well-brought-up guest.”

Covering 6,000 squared metres and situated on top of the Derry and Toms building in central London, the Kensington Roof Gardens are one of Europe’s largest roof gardens. Vine-covered walkways and fountains adorn the Spanish style garden, with Tudor archways, roses and lilies lying adjacent. Oh, don’t forget about the English woodland garden and its 100 species of trees either!

With cascading waterfalls and jagged cliff faces, the Japanese sure know how to create a roof garden. A tranquil retreat within the heart of the extremely urban Osaka, Namba Parks is a dynamic, 8 levelled extravaganza that will directly transport you to a secluded mountainous retreat. It’s actually part of a wider shopping and entertainment complex, so supplies are never too far away.

Okay, this might not be a rooftop garden as such, but we reckon’ Brooklyn Grange may even kick the rest of our list into touch. Yes, it’s a 65,000 square foot rooftop farm in New York City – how impressive is that? What’s more impressive is that all the food which is produced is sold locally to restaurants and on market stalls throughout the city. It’s probably the only place where you’ll find fruit or veg grown on your doorstep.

Just a final rooftop garden to make you feel inspired! 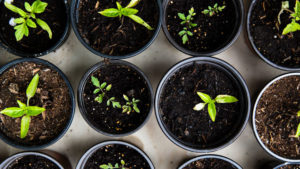 Gardening Trends for 2017
This site uses cookies to offer you a better browsing experience. By browsing this website, you agree to our use of cookies.
Accept