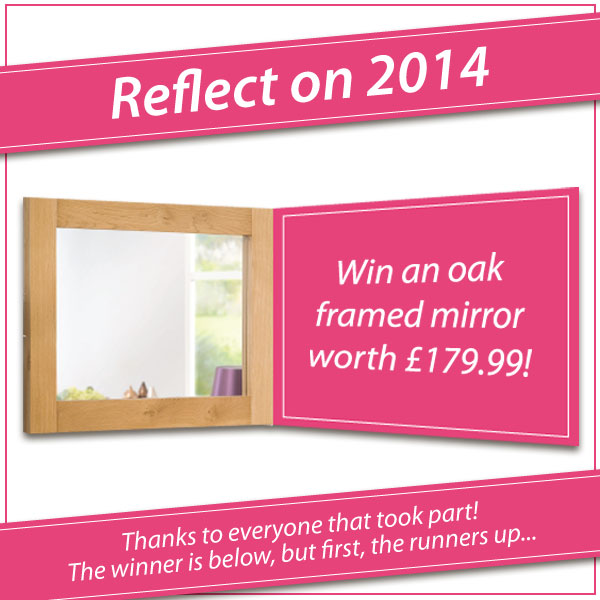 We’ve simply been overwhelmed with the number of responses we have received for our first competition of 2015. We initially decided to select just one lucky winner for the Stirling oak framed mirror prize.

Well, after spending several days sifting through our inbox, we managed to whittle it down to our 10 favourite responses. It’s been a rather difficult task.

Alongside our main prize winner, we’re also delighted to announce that the 9 runners up will receive a 10% voucher to spend on Gardens and Homes Direct or Christmas Trees and Lights, our festive website.

I think my favourite memory of 2014 has to be Christmas Day, and not just because of all the festivities and presents (even though pretty sure its the children’s favourite memory). Since losing my lovely grandmother, my elderly grandfather has travelled each year to spend Christmas with his daughter (my Aunt). This year he was unsure whether he could manage the journey. I was thrilled he accepted my offer to spend Christmas with us.

My Granddad is very old fashioned and I do not recall an occasion where he sat and played with me as a child…However during this visit over the Christmas period I was thrilled to see him interacting and playing with my children (his great-grandchildren)…even though he struggled with some of their board games he persisted and understood.

It might seem like a small memory for some, but for me I have a brilliant memory that I will cherish forever…and my children also hold a special memory of their great granddad…He enjoyed himself that much he’s coming next year!! – ES

I had a letter of commendation from my son’s school about his school work. This is fabulous because the year before I had taken him out of another high school due to him being severely bullied. He’s now so happy at his new school and this has clearly been reflected in his work! I am so proud!!– KS

My best memory of 2014 came in December, we had been fostering our friend’s Beagle for the last 6 months. Sadly, they decided that they were not going to be able to take him back, so he’s now all ours! Currently he’s cuddled up to me on the sofa snoring his head off! He’s a 6 year old dog and we’re his 3rd home. He started off his life in a lab being tested on, so he’s very special and the love of our lives -SW

Surprising my Brother with a 60th Birthday Party. I lied to him for 6 weeks that it was for someone, to which I had secretly arranged for his best chum from school-days to be there. He was also celebrating his 60th Birthday (they hadn’t seen each other in 30 years plus).
Despite some dodgy moments, my brother remained clueless about everything. He had even taken along a present for the “someone else”. When we entered the hall and crowds burst out singing “Happy Birthday To You”, he still thought they were singing for “someone else”. Well, that’s until he saw his chum. They hugged. What a “Kodak moment”. Tears of joy, and their faces were, PRICELESS!! – AS

Losing 50 pounds of weight thanks to my running partner pulling me out of bed each Sunday morning to train for races. Completed my first half marathon in March 2014 and I’m now going on to do four more in as many months! Thanks, Victoria xx – BL

After another failed trip to our local park, partly due to the dire state of it, I formed a community group to take action. Since June 2014, we cleaned the park, made the papers 3 times and got repairs carried out, as well as raising over £1000 for new equipment! Each time I think about how much things changed last year, I smile. I even know neighbours I’d never spoken to and we’re all working together to make our community a better place – NW

After 2 years of serious illness finding out I was pregnant on the day my husband was running the London Marathon for the charity closest to our hearts. Speaking to him at the 13 mile mark knowing I had a bit more news for him at the finishing line is something I will never forget. Even more so when our beautiful daughter arrived in November. – RP

My best memory was, after weeks of searching, adopting our gorgeous rescue dog. He’s an older boy maybe 10 yrs old, but just perfect for us. Not too boisterous and so well behaved. The charity we adopted him from saved him from death row at the dog pound. He had been picked up wandering the streets. He had obviously been someone’s pet, no longer wanted, and later dumped.
He has made home seem complete again after losing our very elderly dog a few months previously, he had to be put to sleep and it was heart-breaking. – CP

My 30 year old daughter achieving her dream and getting accepted on a midwifery degree. With just 40 places available and over 400 applications, I felt so proud of her. She has struggled with health problems and had numerous surgeries over the last 5 years, only to be told that she will not be able to have a child herself shortly before Christmas. – WC

Finally marrying my husband, at the age of 46, after making him wait for the 5 year all clear from my breast cancer. We got married two weeks after the result. I can now see in the mirror a long, happy and healthy future as Mrs Atkinson. – KA

Hopefully, you have enjoyed reading our top 10 favourite responses from our latest competition, to which we’d like to thank everyone who entered and got involved.

Well, it’s just another couple of weeks until we announce the details of our next competition, and you could be our winner. So, to find out more, as well as being in with a chance of receiving £50 to spend on Gardens and Homes Direct, simply click the link below and start recommending your friends… 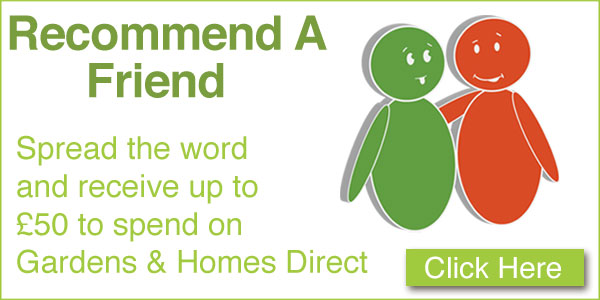 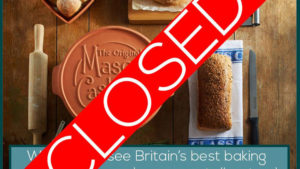 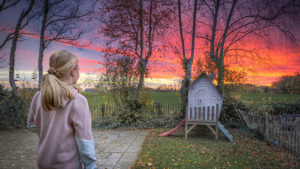 Top Reasons for Investing in a Toddler Playhouse
This site uses cookies to offer you a better browsing experience. By browsing this website, you agree to our use of cookies.
Accept